(read the English translation below) 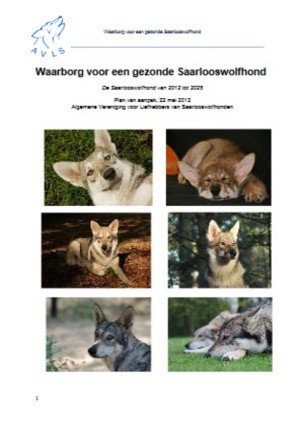 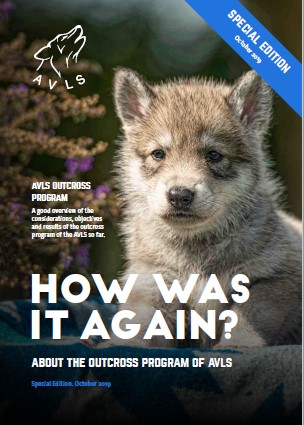 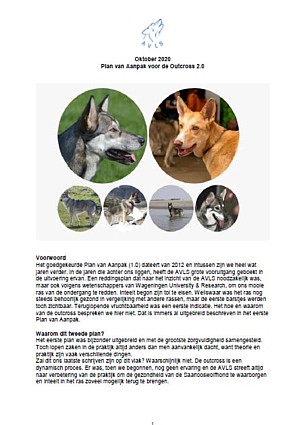 Soon after its recognition as official breed club for the Saarloos Wolfdog in 2010 the AVLS started talks with the Dutch Kennel Club, Raad van Beheer. There were concerns about inbreeding and kinship of the population. The Dutch Kennel Club shared our concern on that issue. The first meeting took place in October 2010.  As a result of that, Wageningen University & Research Center was asked to investigate the degree of interrelatedness of the population. The research was conducted by quantitative geneticist dr J.J. Windig and dr ir M. Spies-Stoop.

This study, which also included alleged outcrosses from the past, brought to light very clearly that all dogs were indeed closely related. Without drastic changes to breeding policy, the degree of inbreeding would rise up to the point where it would jeopardise the survival of the breed.  The scientists advised urgently to exercise outcross while that option was still open. Outcross is the staged and dropwise crossbreed of non-related animals in strictly supervised circumstances. After careful selection of the offspring and crossbreeding back to purebred Saarloos Wolfdogs, 3 or 4 generations will eliminate all differences with the purebred population.

There are many advantages to outcross. By diminishing the interrelations, inbreeding drops drastically. Vitality and physical resilience increase, as do fertility and genetic variation. This also reduces hereditary disorders and diseases. It requires just a small amount of “new blood” to achieve that.

By request of the Dutch Kennel Club the AVLS has drafted a detailed Action Plan, based on the scientific research. The membership unanimously agreed to the plan on May 22, 2012. The plan outlines the causes of genetic depletion, its consequences when nothing would be done, and the steps necessary to safeguard genetic diversity in the Saarloos Wolfdog population for the future. An addendum was later included in consultation with the Dutch Kennel Club.

AVLS members take part in the decision of breeds used in the outcross project. A selection committee advises the board on breeding matters and the next steps in this project. The committee consists of one Saarloos Wolfdog judge, two breeding specialists on behalf of the Dutch Kennel Club and two AVLS members.